Throwing a punch is an act that we often wish to carry out, but here we are not talking about just a simple quarrelsome punch. We are focusing on professional boxing punches that how their impact is so great.

You would be well aware of the fact that practice makes a man perfect. The same is the case on the field of boxing, as the harder, you practice, the more are chances that your punches would be harder. However, in addition to practice, other factors count as well.

You cannot solely rely on practice, but you also need to focus on power generation. Similarly, the angle and position of the body also matter more than you can imagine. The technique and style also act as a catalyst in punching harder.

Our goal is to make a guide that could help the ones who are focusing on hard punches. We are sure that after reading this, you will be able to know the key to a successful hard punch.

Areas You Need to Focus for Energy Flow

In your entire body, for a perfect punch, you need to channelize the energy properly. You just have to focus on these areas for energy flow. These are the following:

The position of hips matters the most while punching an opponent. You would probably be thinking how that is even possible but believe us, it is. You have to move your hips in the direction of the punch.

You have to spin it in the direction of the opponent and your punch. This provides a strong back to the punch you make.

As far as your arms are concerned, we usually depend upon the force of the arms. Arms should be trained to relax, punch and block. Arms should be extended to a certain limit for a proper punch instead of extending completely.

If your arms are fully extended, then you might get off guard and game over. Focus on the force from the chest and shoulders. You should punch with a quick approach without notifying the opponent of the incoming disaster.

Legs provide you with ground standing as a source of balance and support. You would have often observed that most of the extraordinary fighters are bent while boxing. The reason is that through bending, one can transfer body weight over the knees. This would give you a boost in the next punch.

Shoulders are one of the most used parts of the body while punching. The shoulders are often left loose when one has punched. The reason is to relax them as much as possible. It would create an opportunity to throw a stronger punch.

When you punch, you should raise your shoulder as it makes the punch evenly more effective. The combination of arms and shoulder muscles helps to throw a harder punch.

A perfect punch is a combination of several factors. The punch is limited when it is only based on arms or shoulders etc. For this, you have to focus on the movement of the entire body. Your body should rotate in the direction of the punch.

Never need to lean forward as it is risky, and you might be off guard. Rotate your body with a limited extension of your arm, and the effect would be quite clear to your eyes.

No matter how hard you punch or whatever technique you use, it would be in waste if the punch doesn’t land properly. This can overly exhaust you as you would apply your whole pressure, but if it is not properly landed, then the frustration is enough to ensure your defeat.

You should be capable enough to define the range in which your punch would hit. Too close and too far punch would usually drain your energy, and the impact would be minimal. So aim at a right angle and right point while you are punching.

There are some specific punches which are following. 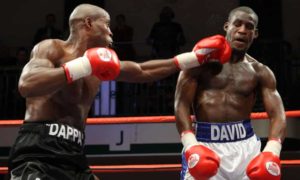 One of the most renowned punches of all time. It is the best one for knocking out the opponent, but the timing and distance matter the most in this one as well. You don’t need to lean for a jab; rather, maintaining the right distance and movement of shoulder forward is good enough to knock your opponent out. 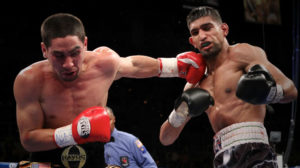 For this traditional punch, most believe it is easy while it is still technical. You need to decide whether it is the body you are aiming for, the face. The position of the elbow would move up and down depending upon the aim.

You have to make your whole body rotate as and derive power from your legs. There is multiple footwork in this process. As you throw a punch, you have to lift your left foot to keep a proper balance and bent the left knee while carrying out a left hook. 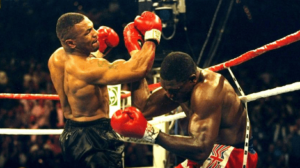 We usually love a knockout when it is an uppercut. It is one of the best and most renowned moves of all time. Normally it is believed that the aim for the chin is in the vertical direction. This is wrong as the movement is somewhat diagonal.

While you swing your arm, your whole body goes with it. You have to focus that your palm should be facing you. This means that the wrist needs to be flipped when you are going for an uppercut. 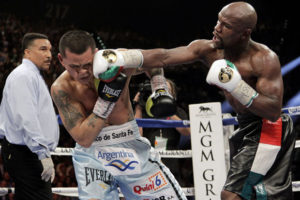 The most common aiming and most effective one for all-time boxers. This one is solely based on the rotation of the body and the force you put in your punch. You have to keep the distance and less stretching in mind while going for a right cross.

There is a chance that the opponent might avoid this one as it is simple to perceive. So it is important to make it to the left as much as you can. This doesn’t mean that you would spin entirely and go off balance. You have to maintain your balance and aim the punch at the same time.

Best Way to Hit an Opponent

It is quite important to determine what the perfect time for hitting an opponent is. You cannot just randomly throw a punch, and neither would the opponent allow you to do so. For this purpose, you need specific skills and certain important factors that you need to keep in your mind.

A hard punch can put the game in your hands. You have to learn when the right time for throwing an excellent punch is. You have to look at the following aspects.

When an opponent is in the duration of a punch or is in his motion, that is the best time to break his will and motion. Nothing can be as frustrating as a counter punch at the time of one’s punch. Just hit him as he is about to punch you.

It is quite important to find an angle that would completely stun the opponent. It is also risky as you might get off guard, but once he is stunned, you can get a series of good punches in a row. A hard punch at a good angle is enough to shake his will.

This one is difficult to achieve as in the game, and the opponent is always expecting this element. However, landing a hard punch from some weird angle or breaking through his strong wall of defense is good enough. Exceptionally fast boxers like Joe Frazier had different angles and could simply defeat the opponent.

How to carry out the Best Punch

For a killer, punch strength is not the only option. You have to look for the speed as well. It is the combination of both that makes an excellent punch like Mohammed Ali. For the best punch, you should focus on the following factors.

You would probably be thinking how a center of gravity is even linked to a punch? Yes, we agree with you, but would you like to read a bit more? We agree that it is difficult to maintain the center of gravity, but there is an easy way as we don’t expect you to sit down completely.

Just bend your knees a little bit. It would be several centimeters, and the effect would be visible to you. You can have complete control over your body, and as the joints are closer, so it is easy to transmit strong force throughout from your body to the punch.

There is nothing more important than a proper relaxation of arms after you extend them for fighting. You have to buy time for relaxing your arms. When you are going to punch, you will do this by all you’re might so give a proper time to relax your shoulders and arms.

By the name of the word technique, you might wonder the name of it or some demonstration. In reality, you have to practice by following simple steps. This includes an extension of your arms with a complete rotation of the body.

Focus on bending your knees to maintain a strong gravity center. Similarly, the arm shouldn’t be extended as it might lead to a missing punch. You have to keep the chin down to avoid any lethal strike. 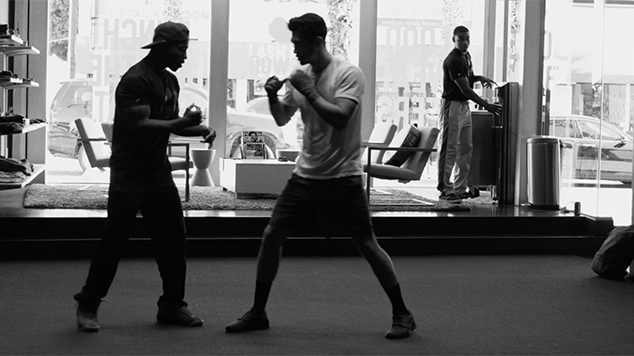 Maintaining stance is most difficult. It includes your fighting style, your foot movement, and the position of your arms. Keep o focusing on your stance after every minute.

It is important to be agile and flexible during a match. A flexible movement is always helpful in escaping lethal punches. It will be difficult for the target to hit you when you have a quick movement.

It often leads to frustration in the opponent, and soon he might make a mistake which is an opportunity for you. Perfect punches are a product of several things, and a fast movement can open opportunities for a series of excellent and hard punches.

Are you aware of the fact that most of the punches that decide the fight are counterpunches? There is always a chance that the opponent might miss while hitting you. That is where your counterpunch could create a big impact.

It can break the defensive wall of the opponent and disrupt his movement as well. Obviously, for such a meaningful punch, you need nerves of steel and patience to bear many punches. However, you have to wait for the right moment and get him off guard due to his mistake.

Stamina is required for almost every game. We agree with you as well. But for boxing, the stamina should be comparable to a mountain climbers. Do you think about the reason? You are not only going to need stamina for standing in the ring but the power to punch.

Stamina reflects the capability of your body to carry out strong punches with flexible movement. You need regular exercise and stamina, making intense exercise to overcome this element. Without considerable stamina, you would never know when you lost.

For hard punches, you need to become hard like steel as well. You cannot just throw punches. You are going to get some reaction as well. How do you think you can survive them? You need to harden your upper body to be strong enough to bear a punch.

Fists and Forearms to be Rock Solid

Punching at the end of the day is nothing but a game of strong fists. How to get fists strong? Use a punching bag, and when you become a pro, you can use a cement bag that would make your fist like iron fists and forearms like steel.

For a hard-punching capability, you have to look for your body stance, your agility, and the speed of your punches. You need to focus on every part of your body to get better than others. Hope this would have helped you.